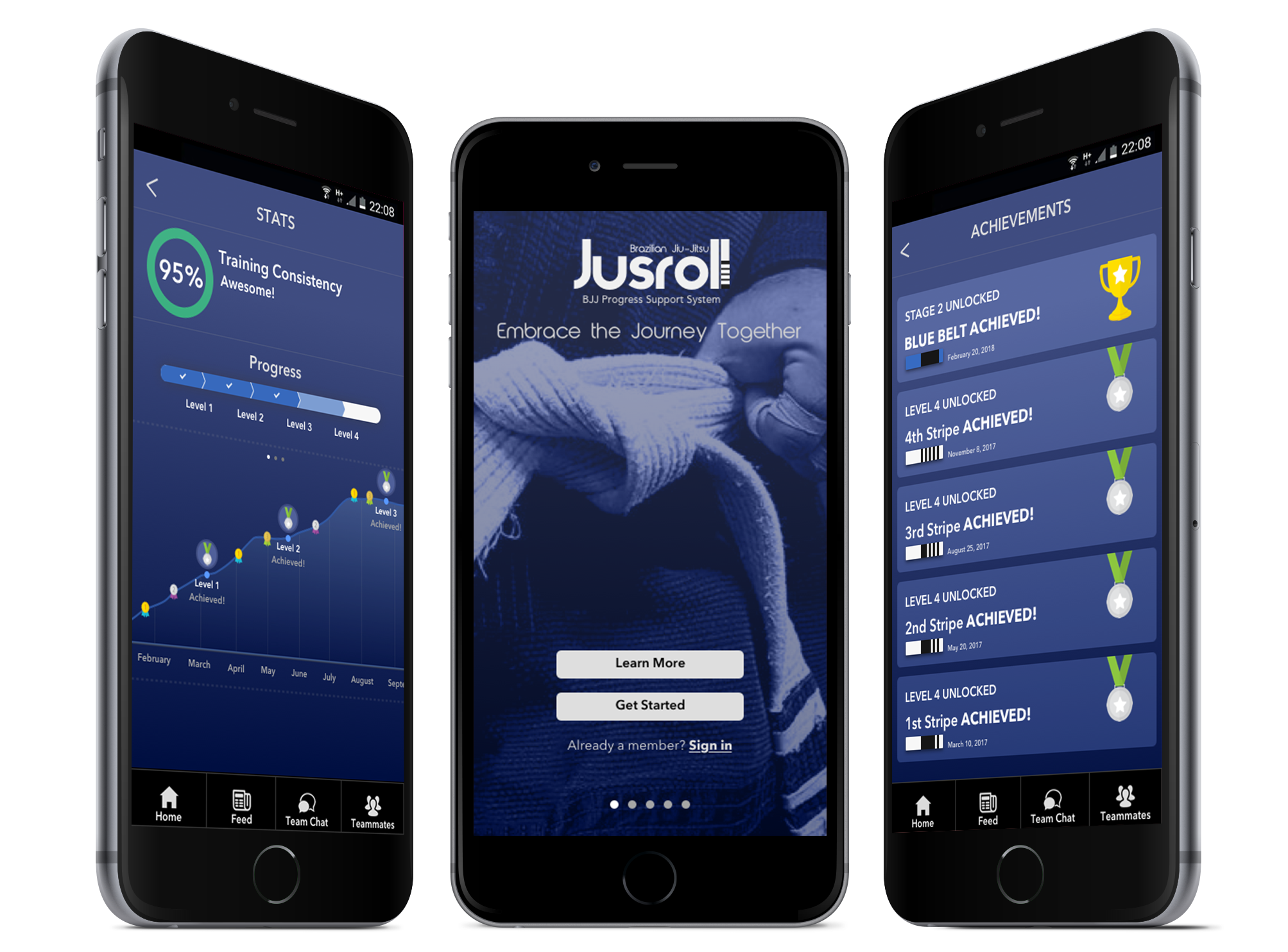 Brazilian Jiu-Jitsu, or BJJ, once an unknown martial art in the US, gained popularity in 1993 with the advent of the Ultimate Fighting Championships (UFC). Royce Gracie, from the Gracie family,  popularized this sport by being able to subdue and win all of his fights against much larger opponents utilizing this martial art.

With the continued success of the UFC, Brazilian Jiu-Jitsu has gained steady traction in attracting more and more practitioners to this sport each year, even celebrities like
Demi Lovato and Anthony Bourdain.

Although Brazilian Jiu-Jitsu is more popular than ever today, this martial art faces a number of challenges for its growth and sustainability. One challenge for BJJ academy owners is dealing with the high dropout rates of new students, usually within their first year of enrollment.

The focus of this project was to explore this problem space by gaining deeper user insights through conducting user research. And with the data collected, work towards a solution in improving student retention.

Postings on BJJ related forums were done in getting personal, genuine feedback from the BJJ community on reasons why they quit.

Being a BJJ practitioner and having experienced quite a number of new students come and go, it was found that 90% of people never make it to the next belt (blue belt), and then only 1% of blue belts advance to become black belts.

“ My friend who introduced me to it stopped going. Also, we were the only two females in class. Without her being there, I was a very new white belt in an all-male class.”

6 students total were interviewed. 4 out of the 6 students quit BJJ with no intentions on returning, while 2 of these students have quit at some point, but have continued their training.

A commonality among them was that their motivation to start training BJJ came from the desire to take up something fun and challenging that would get them mentally and physically fit. 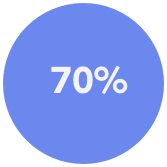 of respondents quit Brazilian Jiu-Jitsu
within the first year.

From speaking with students that have quit, their initial reasons for quitting stemmed from either lack of money or time.  But what was discovered was  Lack of motivation was the actual main cause of them quitting.

What caused their lack of motivation?

Although they could have been improving, they felt that they weren’t progressing, as they would constantly be outperformed during training.  They frequently felt lost while training, and felt it was difficult to confer with their instructors about their personal concerns. Their training eventually became tedious and less fun.

“At times, there was a connection that isn't felt or created elsewhere. I miss that brotherhood and the fact you met people from all different walks of life. It made it interesting to be around.”

When asked about how they quit, all participants stated that it was a gradual process for them, attending less classes each week until they
eventually stopped training overall.

When asked if they considered continuing their training, ALL participants showed interest in returning, but were apprehensive as they knew
how challenging it would be.
Using the data collected from my user research, a Persona was created as a representation of the target group:.

Mike Mrkulic, a 25-year old engineer, enjoys training in BJJ as it allows him to challenge himself physically and mentally.

Mike works a mundane job and started training in BJJ a few months ago in order to improve his fitness and confidence. But he’s been feeling frustrated these days, as he feels that he hasn’t progressed at all by his performance against other teammates.

When consulting with his instructors, he’s told that he’s doing great and to continue to train hard.  He feels that the feedback given to him seem generic and
isn’t exclusive to him 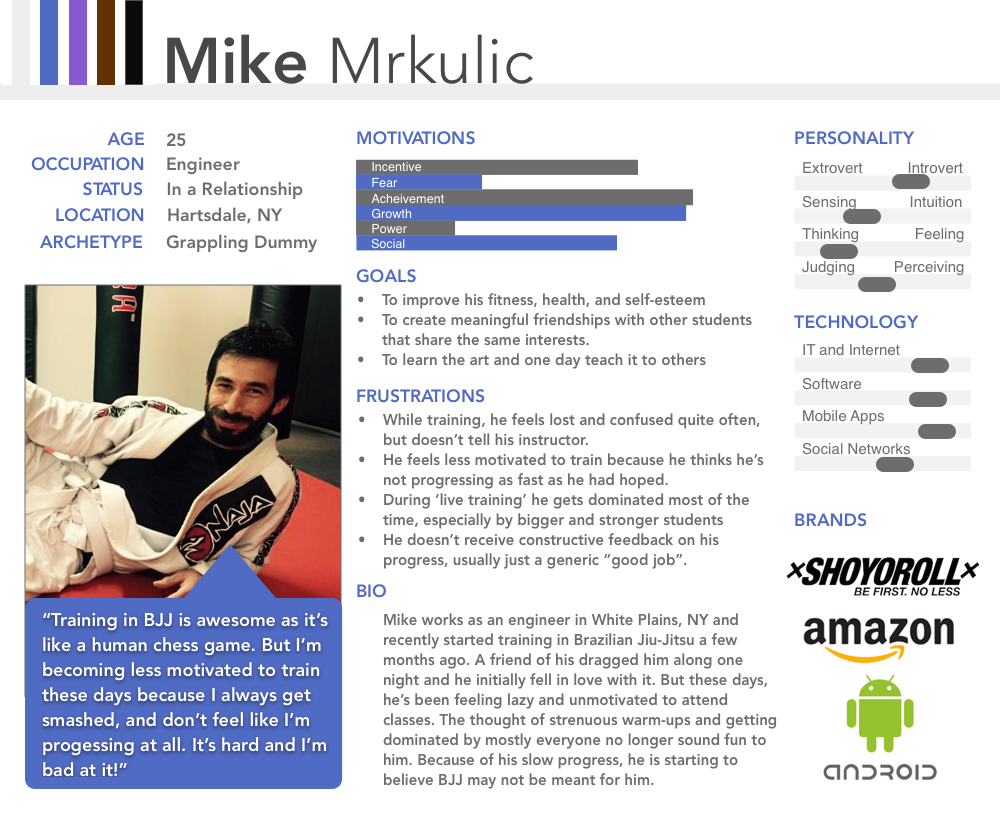 An Empathy Map was created in order to try to establish deep,  personal empathy with
our users to determine their needs and wants. 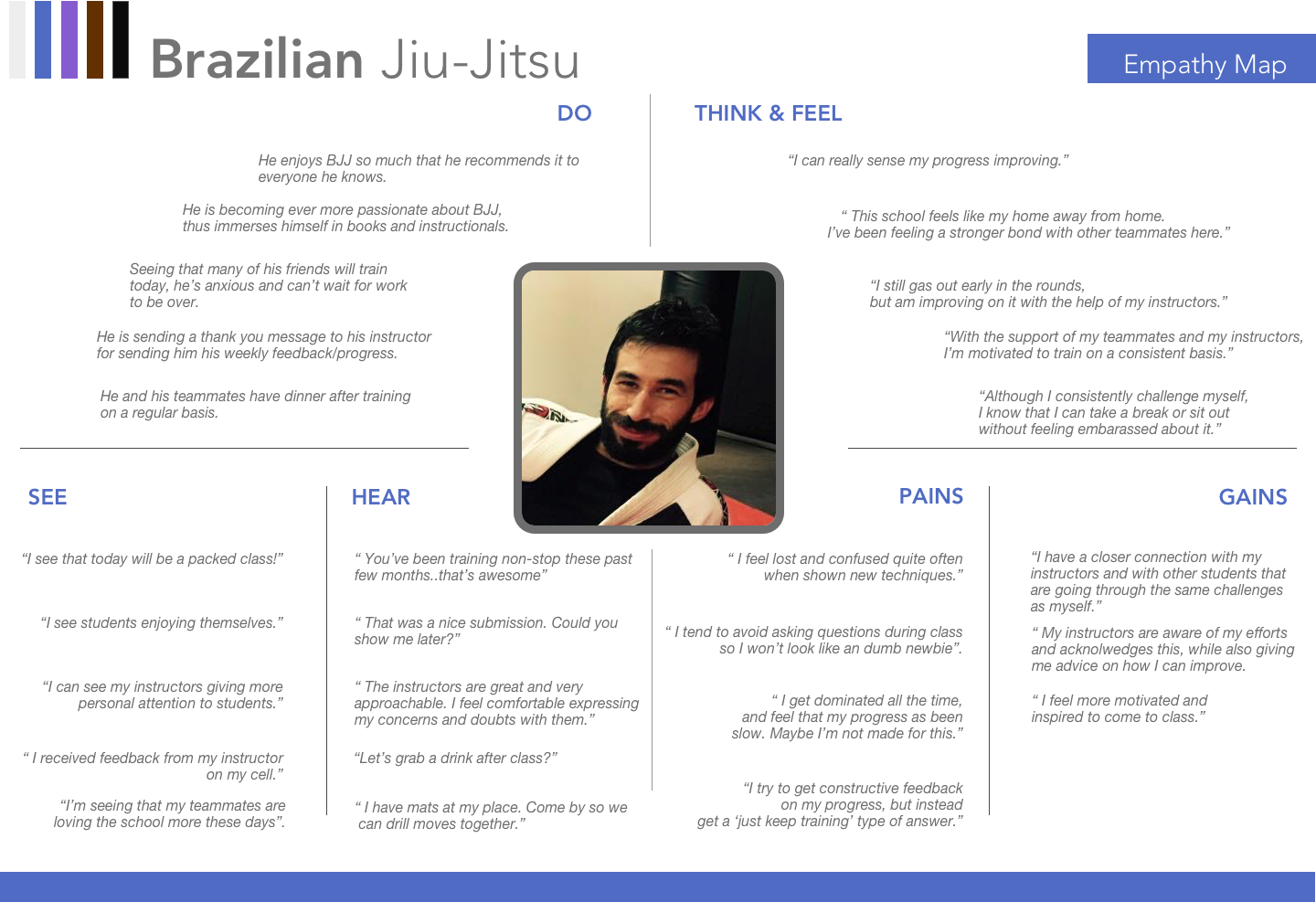 A Customer Journey Map was also created to further empathize with our target group by trying to gain a better understanding the essence of the whole experience from the customer’s perspective. 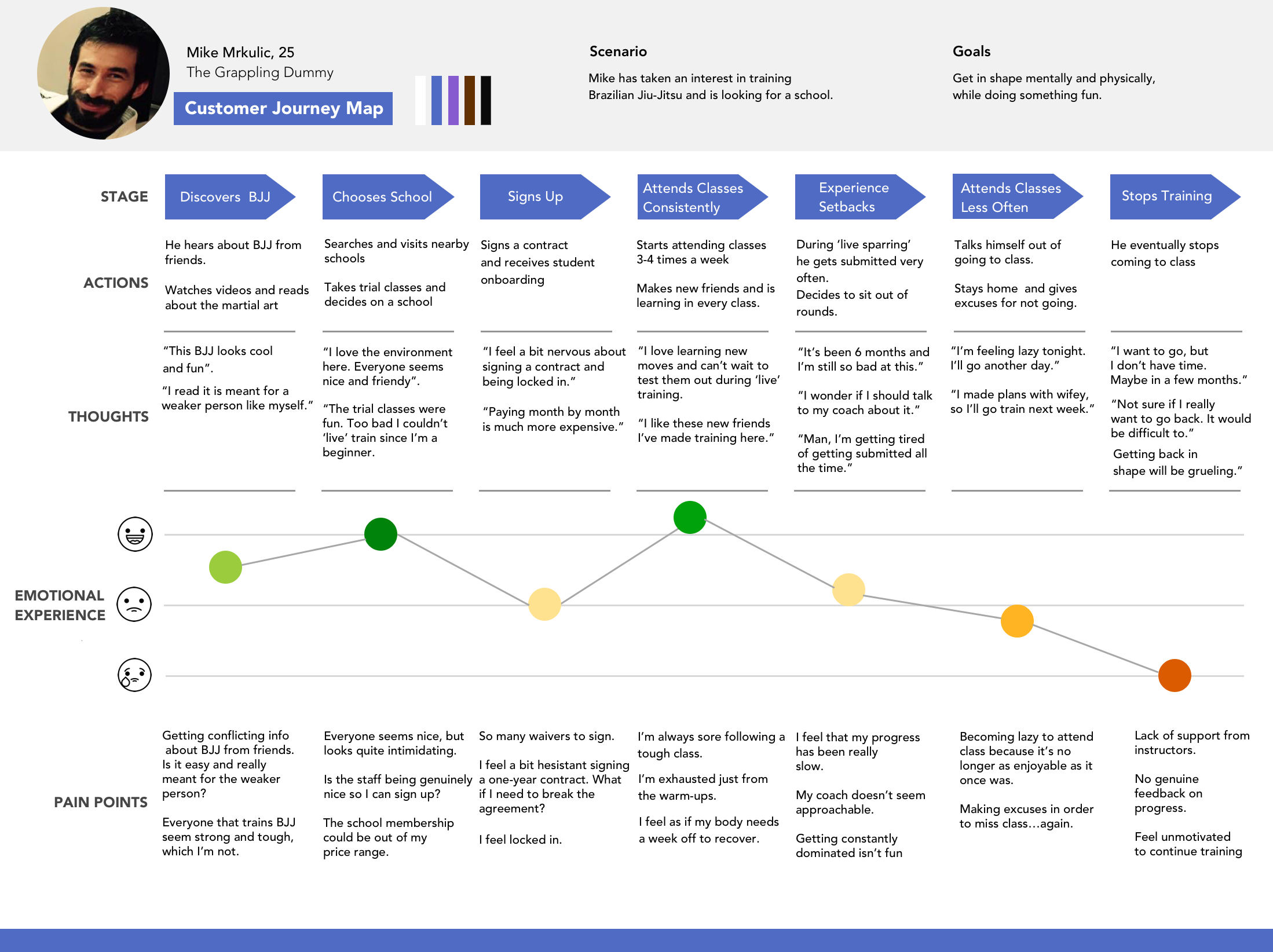 By synthesizing and making sense of all the information and  user insights gathered from my research,  I wanted to define the right challenge to address when  heading into the Ideation Phase. 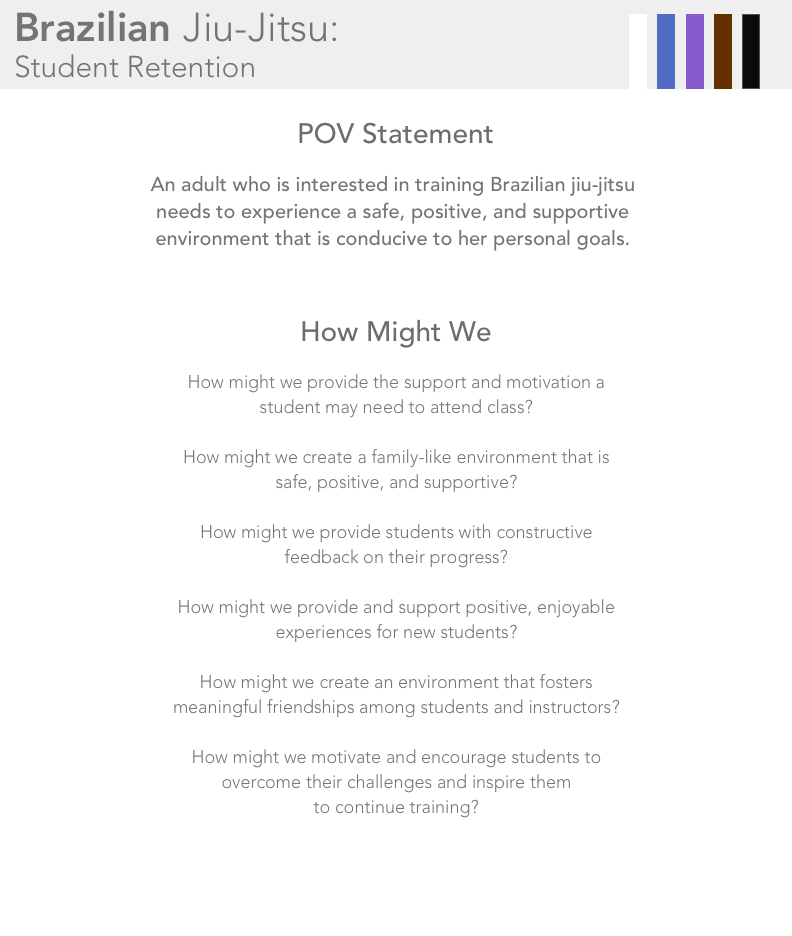 Once I’ve defined the design challenge into a POV statement, the “How Might We” (HMW) method was used to explore new ideas and possibly solutions to the problem space.

The Ideation Phase focused on finding possible solutions to improving student retention.
Based on insights and needs discovered during user research, it was decided to focus on a solution that would address the following pain points:

• Students didn’t feel as though they were receiving individualized
feedback on their progress.

• They felt that there was a lack of a support system, where teammates can motivate and support one another in reaching a common goal.

• Lack of Consistency in training slows one’s progression, and is caused by lack of motivation  and self-discipline. 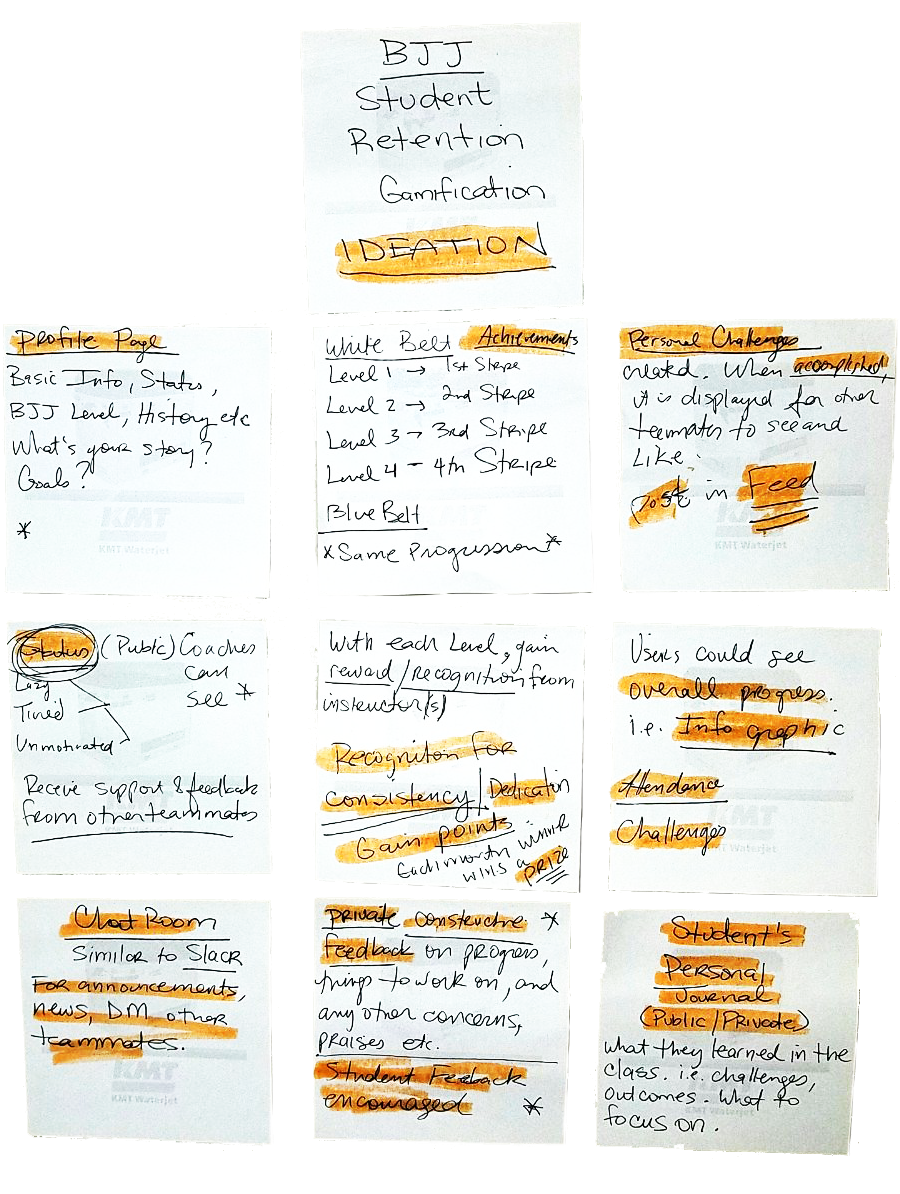 I decided to pursue the idea of designing a fun game-themed environment that would not only foster team support, but would also  allow friendly competition between teammates, in turn inspiring and motivating one another to achieve one’s personal goals.

The final sketches were refined and placed into a Storyboard to show how the target user group, represented by our persona, Mike, would use this new mobile app during his typical work day. 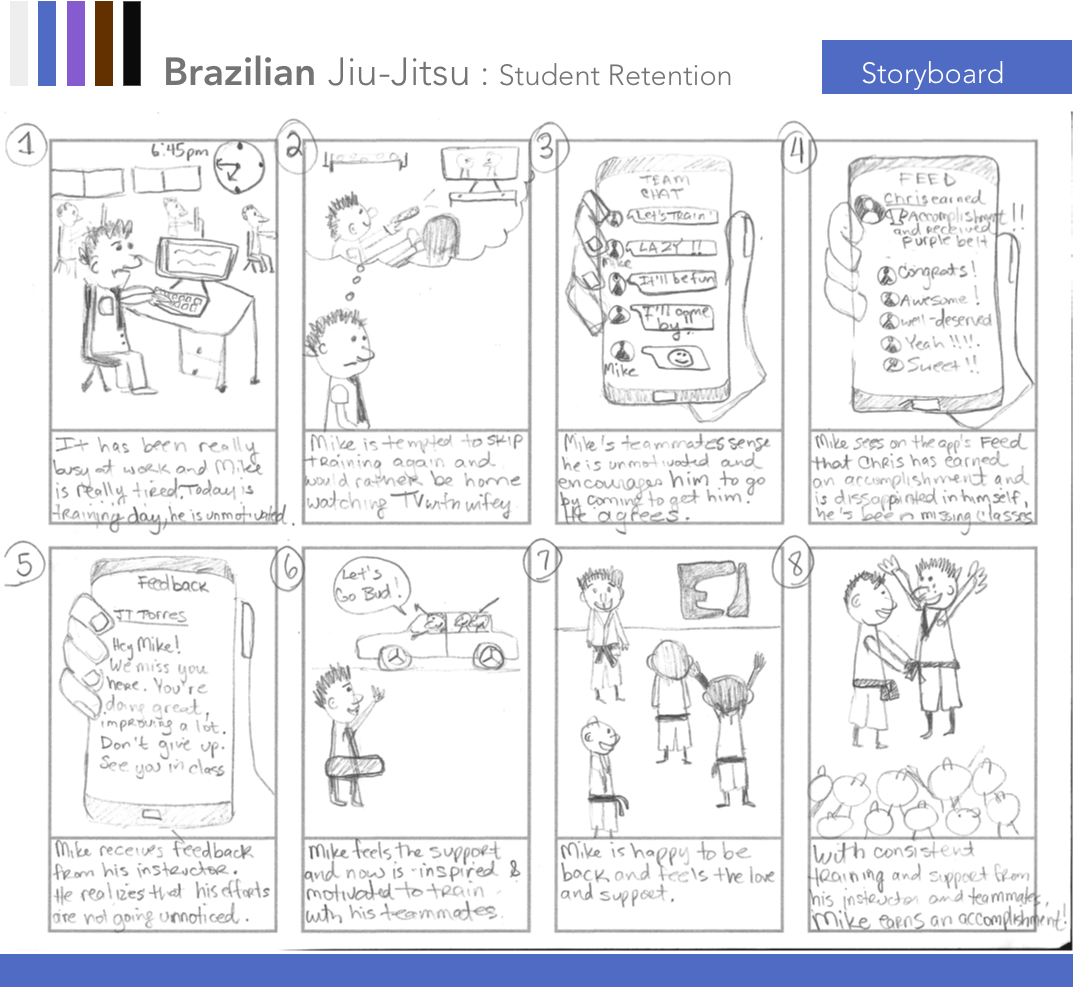 Storyboard sketches demonstrating how our persona, Mike would typically use the mobile app
and the end result from using it.

Building a new mobile app from scratch was a bit of a challenge, but my idea was to build an app that was modern and simplistic in functionality,  placing great emphasis in following standard design patterns and principles. I believe this approach would only enhance the user’s experience.

By referring to the storyboard and other sources for inspiration, Sketched Wireframes were initially created. These wireframes were then used to create a Sketch Prototype using Marvel. 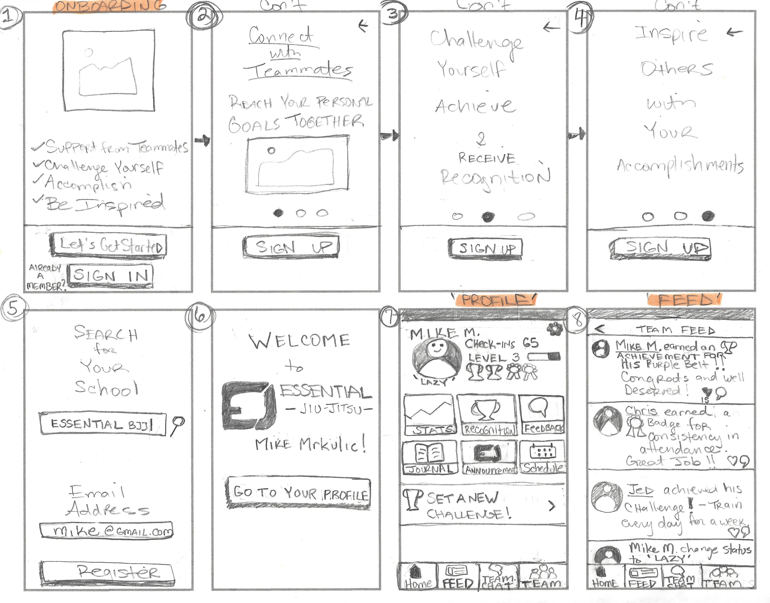 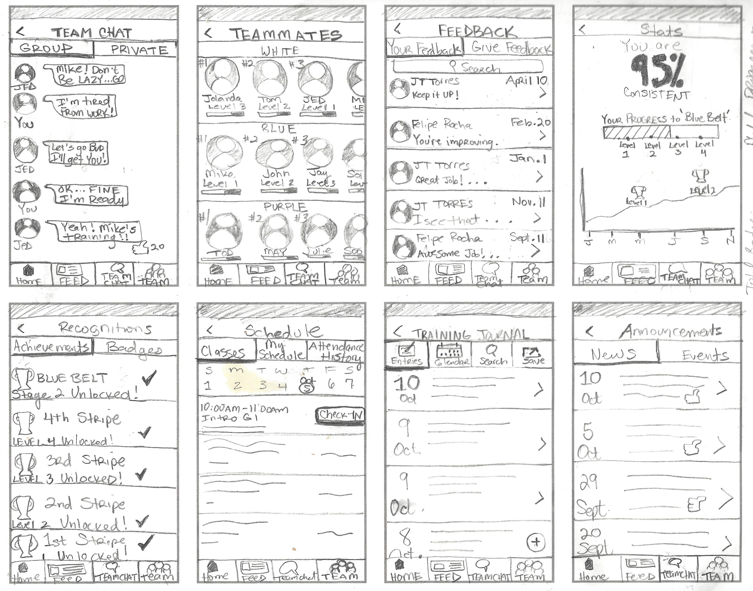 First rounds of usability testing were then  conducted with  4 users representing the target group, using an interactive  sketch prototype created with Marvel.

“This is a cool app. Simple navigation. How do you improve your rank?
By earning points?”
Participants were initially given an overall brief about the new mobile app and what the testing was about.  They were then given 2 specific tasks to do:
go through the process of registering, and then  explore the app’s features.

Feedback and from all participants were gathered and analyzed to  discover
possible pain points and where improvements can me made.

• All participants thought the application was straightforward and simple to navigate overall.

• The registration process was an easy process or all participants.

• All participants were curious about how the“gamification” aspect of the application worked.

“There is something funny around the finding your local club,
having to click search after it has actually found your club seems strange.”

Based on the feedback received from the 2nd round of usability testing, the following improvement(s) were made:
• In the local club search during registration, the unneeded extra step of having to hit the search button once you choose the  auto-suggested club name has been removed.
Experience the JusRoll App in Action Below!
* Click Play *
Click Here to Interact! 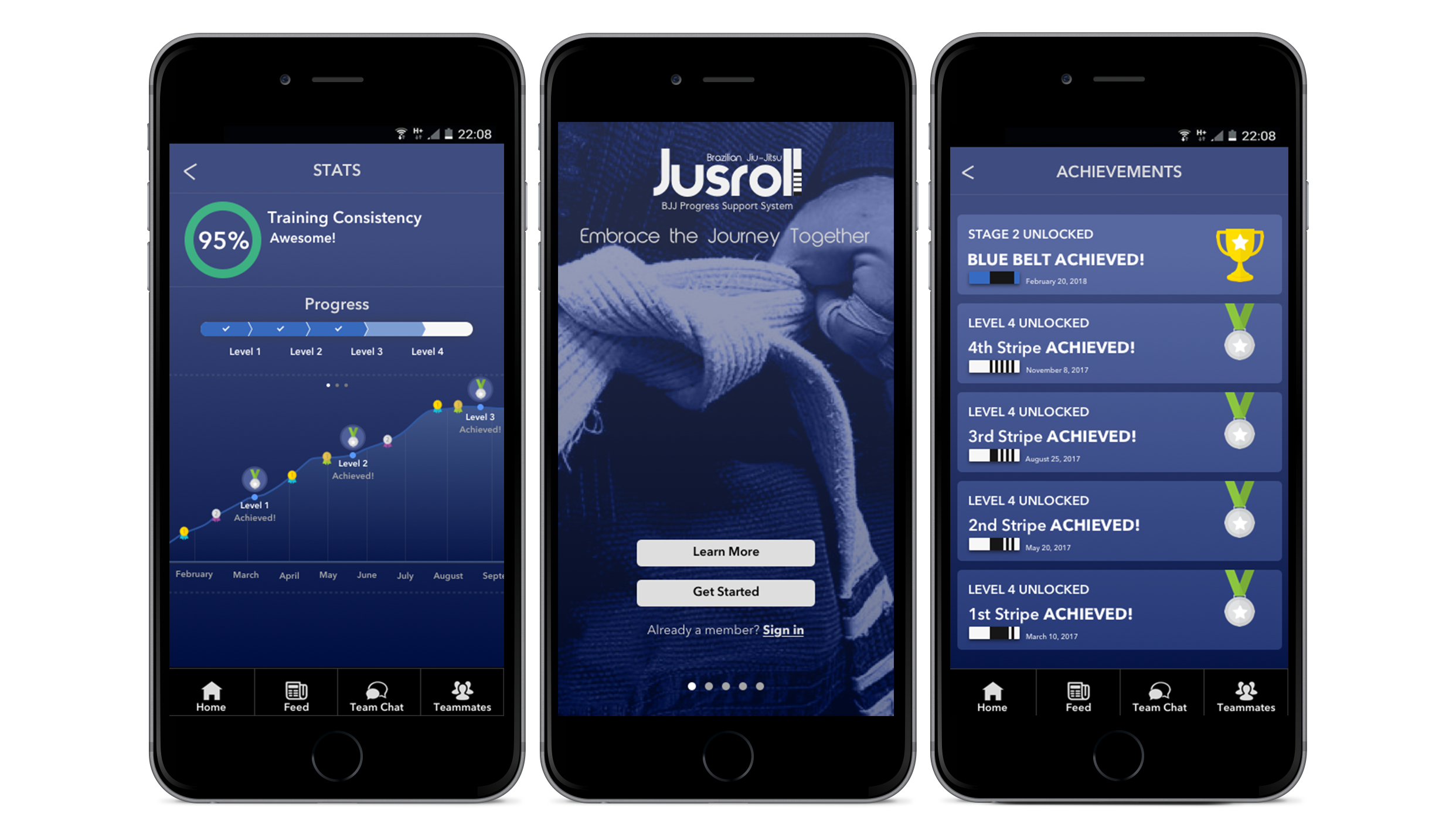 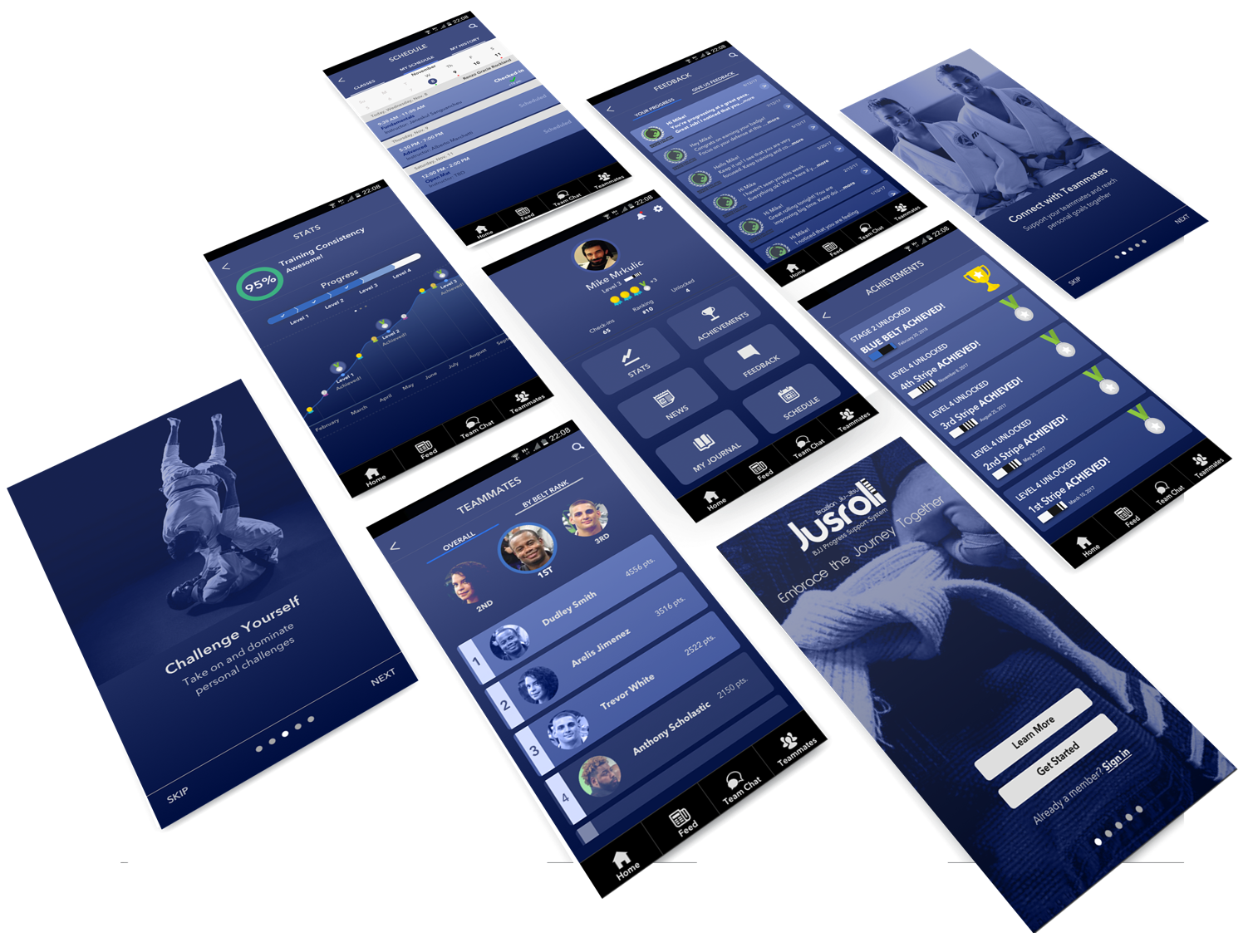 The Final Key Screens with iterations from user feedback

The prevailing problem of high turnover rates in students is a problem space I wanted to tackle and attempt to solve. As a practitioner of this martial art, I’ve personally seen and still experience a great many of novice students come and go on a normal basis.

From user interviews, it was found that the main underlying cause of students quitting isn’t because of time or lack of funds, but is due to the lack of support and the lack of  consistent individualized feedback from staff.

My idea of implementing gamification into this mobile app is to provide a competitive, yet fun and friendly platform, where ongoing feedback is given, and where students can provide support for one another.  Affording students these features would help increase motivation, resulting in the improvement of student retention.

Building this app from scratch was indeed challenging, but following standard design patterns and principles made the experience gained enjoyable and invaluable.

This project is an ongoing iteration process, where my ultimate goal is to be an integral part of bringing this concept app to fruition as a fully functional mobile app. 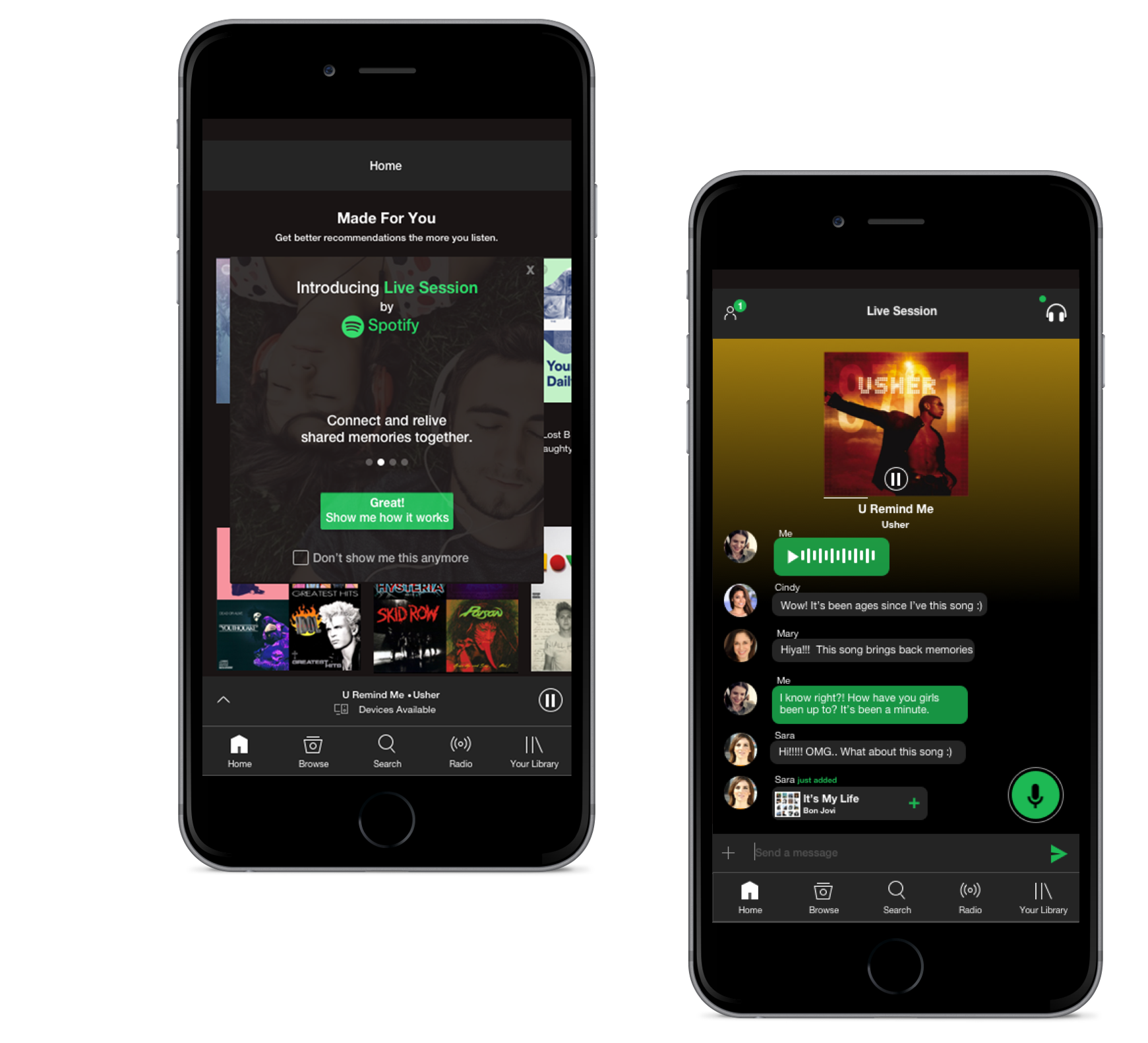