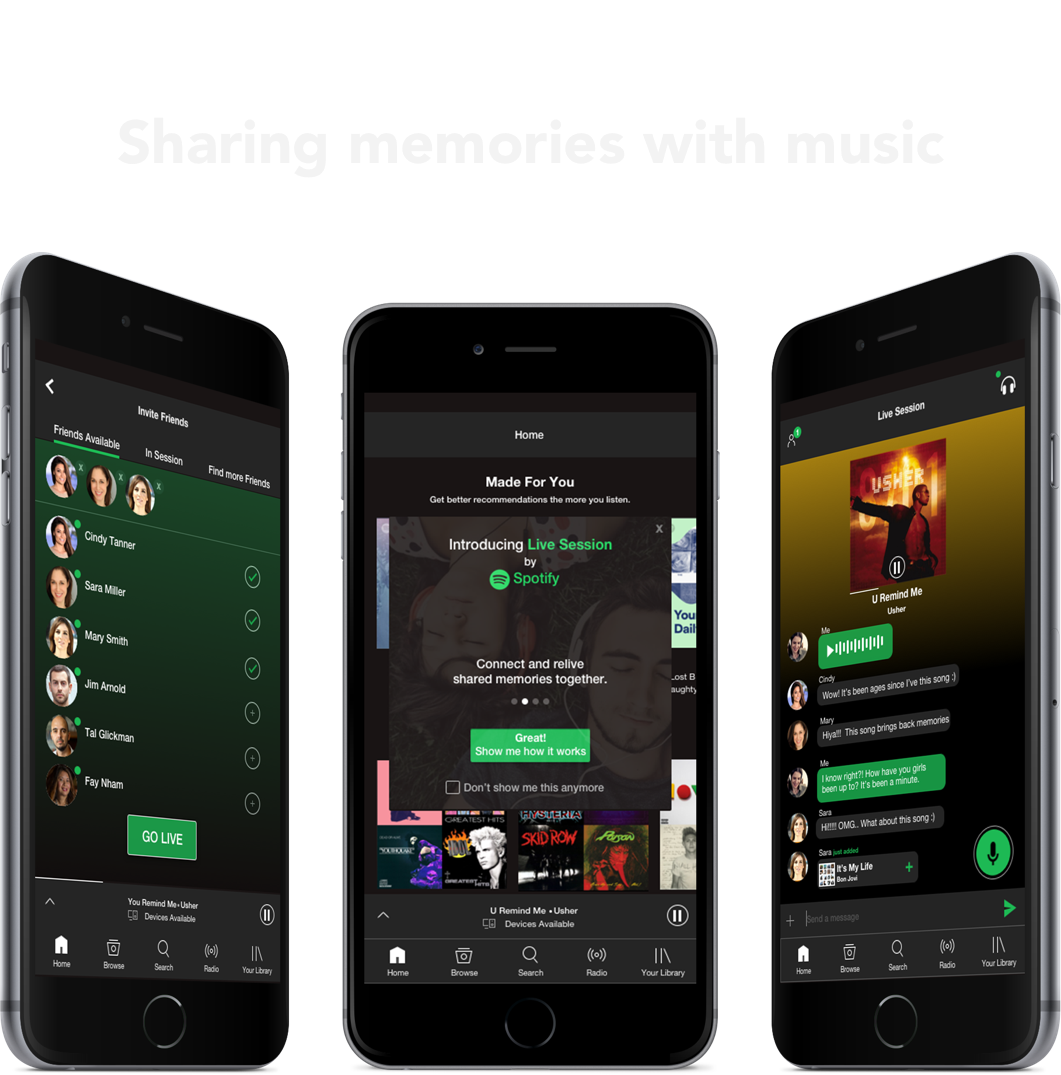 To incorporate a social feature in Spotify that will foster music sharing and allow engaging and meaningful connections.

Spotify is a leading music streaming service offering a revolutionary and unrivalled music experience to a worldwide community of over 140 million users and 60 million paid subscribers.

Spotify’s social features are currently limited, as they only offer basic music sharing via sending links to a third-party service.

The focus of this project was to explore on the topic of music sharing, to understand why and how users share their music, and with the results from user research, work toward a solution for improving the social aspect in Spotify.

Research began by conducting research on Spotify and it’s music sharing capabilities, as well as of their main competitors’, to gain a better understanding on the music sharing domain.

From the research done, it was discovered that Spotify recently removed it’s inbox and messaging features  due to ‘low engagement’ based on their data analytics.

Spotify has received negative feedback from its community of users who argued the main reasons for low engagement were due to accessibility issues and users being unaware that this social feature even existed. This information would later be proven useful in the ideation phase of this project..

"What motivated me to share the song was to remember  the time we used to go to the clubs, to redeem from the past the good time of our lives.”

6 users who currently shared or have shared music were interviewed.  They all love creating curated playlists, discovering new music and would share music with close friends on occasion.

A commonality among them is that they feel sharing music is somewhat personal and as a form of emotional expression of who they are, thus, they feel a desire to limit sharing music to only their circle of friends.  They share if they think that their friends would enjoy the song, or because the song evokes a memory that was shared between them. 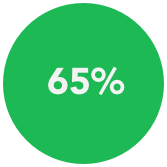 of respondents share music with their friends,  with the majority sharing only occasionally.

There were 53 online survey participants.

• To share past experiences or memories they were both a part of.
• To communicate one’s current mood or emotions.
• They share with the assumptions that their  friend would like the song as well.
• They want positive feedback and social validation.

From talking to users, I discovered that they started losing contact with close friends as they got older, especially post-college, due to their careers, family, and other obligations.  Because they are busy with their own careers and families, a few months turned into years of them not keeping in contact with their friends.

While listening to certain songs, these sings evoke past memories, or ‘time travel euphoria’ shared with their once close friends. They would love to reconnect with these old friends of theirs, to be able to share and relive these past memories with them again, but feel a bit awkward in doing so.

“If I am enjoying something and it makes me think of someone else, I think that's the kind of special connection you don't ignore.”

When asked if they would contact their friend at a later time, some users mentioned that once the song is over, that emotional moment will have passed, and that they would most likely not contact the friend, since it has been
too long since they’ve spoken.

The desire to spontaneously share a memory with a friend in the moment comes from emotions evoked by listening to a specific song. That feeling of sharing a memory subsides once the song is over..
Using the data collected from my user research, a Persona was created as a representation of the target group:

Daniela Tran, a 32-year old Private Banker, who is a busy professional,  as well as a mother of 2 kids.

Daniela works long hours, but enjoys listening to music whenever she has free time to herself.  While listening on her Spotify, she usually finds herself reminiscing about past memories with old friends she hasn’t seen or spoken to in years due to her work and family obligations. She would love to reconnect and share these memories with them again. 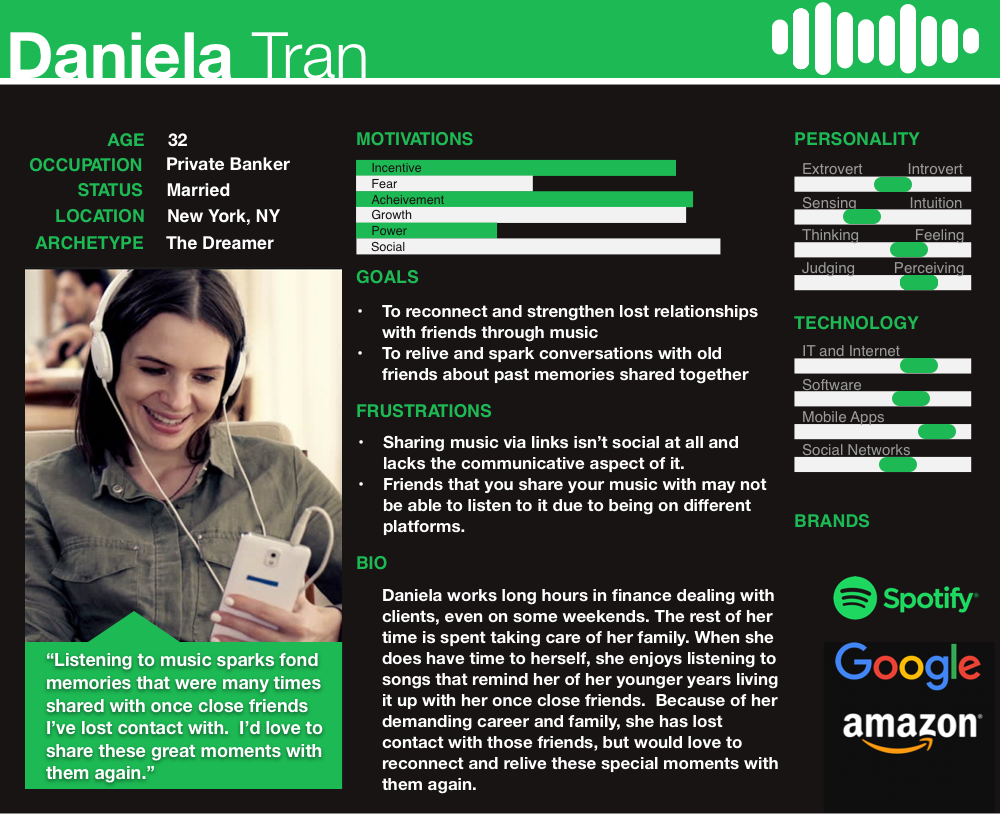 An Empathy Map was created in order to try to establish deep, personal empathy with our users to determine their needs and wants. 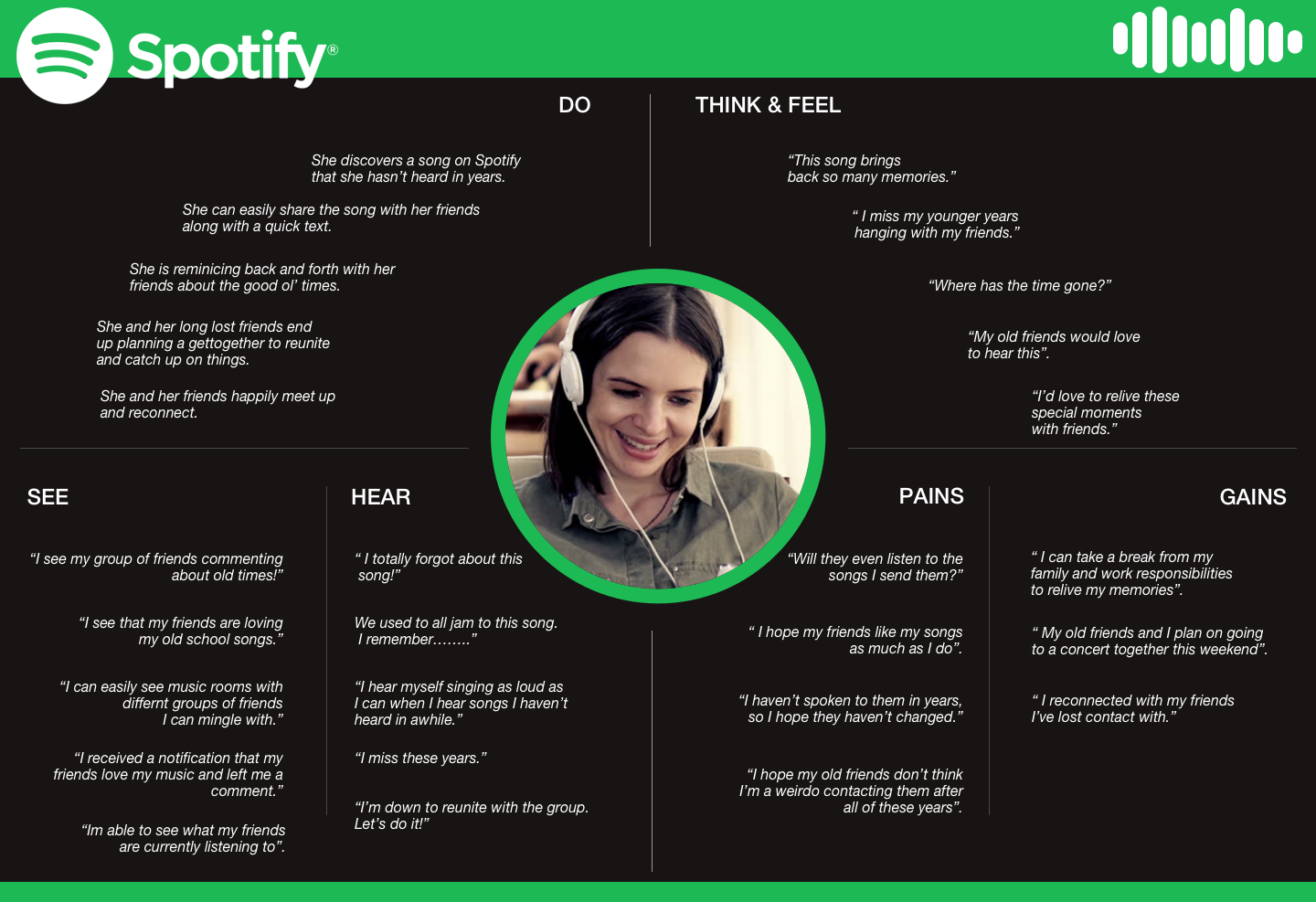 By synthesizing and making sense of all the information and  user insights gathered from my research,  I wanted to define the right challenge to address when  heading into the Ideation Phase.
A busy working professional and mother of 2 needs to make meaningful connections with friends/family she’s  lost contact with because she would love to share and  relive past memories with them again.
Once I’ve defined the design challenge into a POV statement, the “How Might We” (HMW) method was used to explore new ideas and possibly solutions to the problem space. 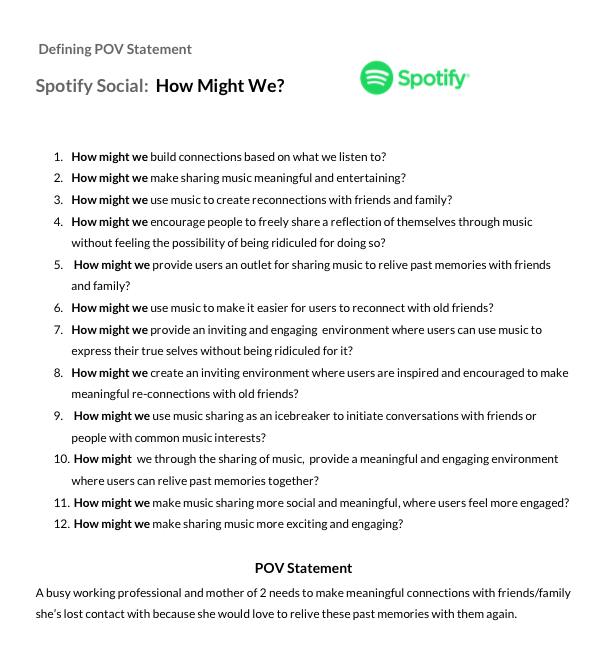 Based on insights and needs discovered during user research, it was decided to focus on a solution that would address the following points:

• The desire to share a memory with someone is temporary,  and typically subsides once the song is over.

One method used to tackle this design challenge was the Crazy Eights Method, the idea to quickly sketch out as many ideas as possible, then converging on the strongest ideas and refining them further. 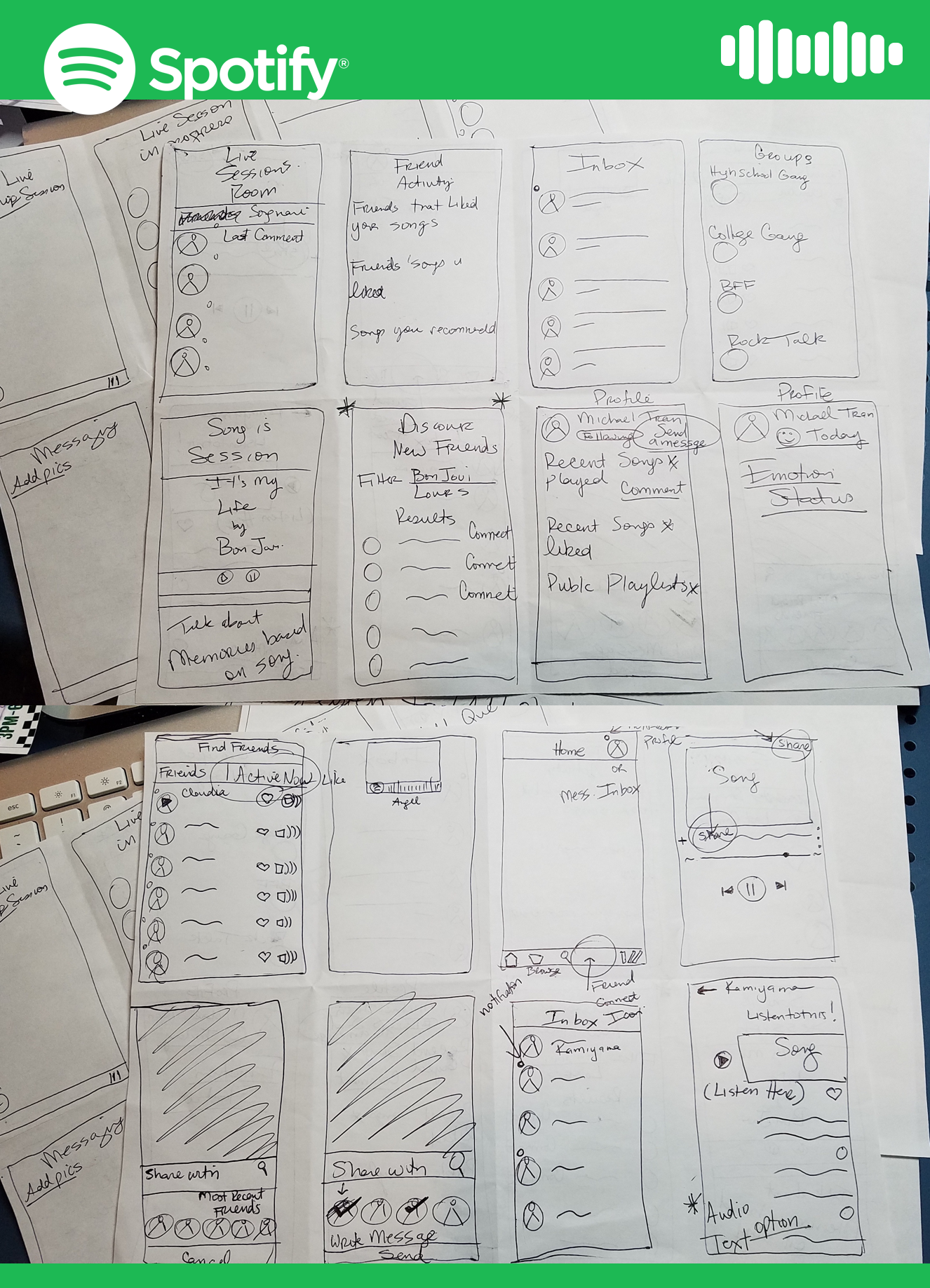 I personally found this method interesting, yet very challenging  as you only have 40 seconds to sketch out each idea.  I stumbled quite a bit as there were times I couldn’t come up with any ideas. Nevertheless, I persisted and am glad that I went through with it until the end.

I decided to pursue the idea of creating an environment that would not only foster music sharing and meaningful discussions, but would also focus on replicating a real-life environment where listening and talking synchronously would be possible, as if you were with the friend in person.
An in-app real-time music and audio streaming.
Listen and chat together synchronously
The final sketches were refined and placed into a Storyboard to show how the target user group, represented by our persona, Daniela, would use this new social feature in the Spotify app. 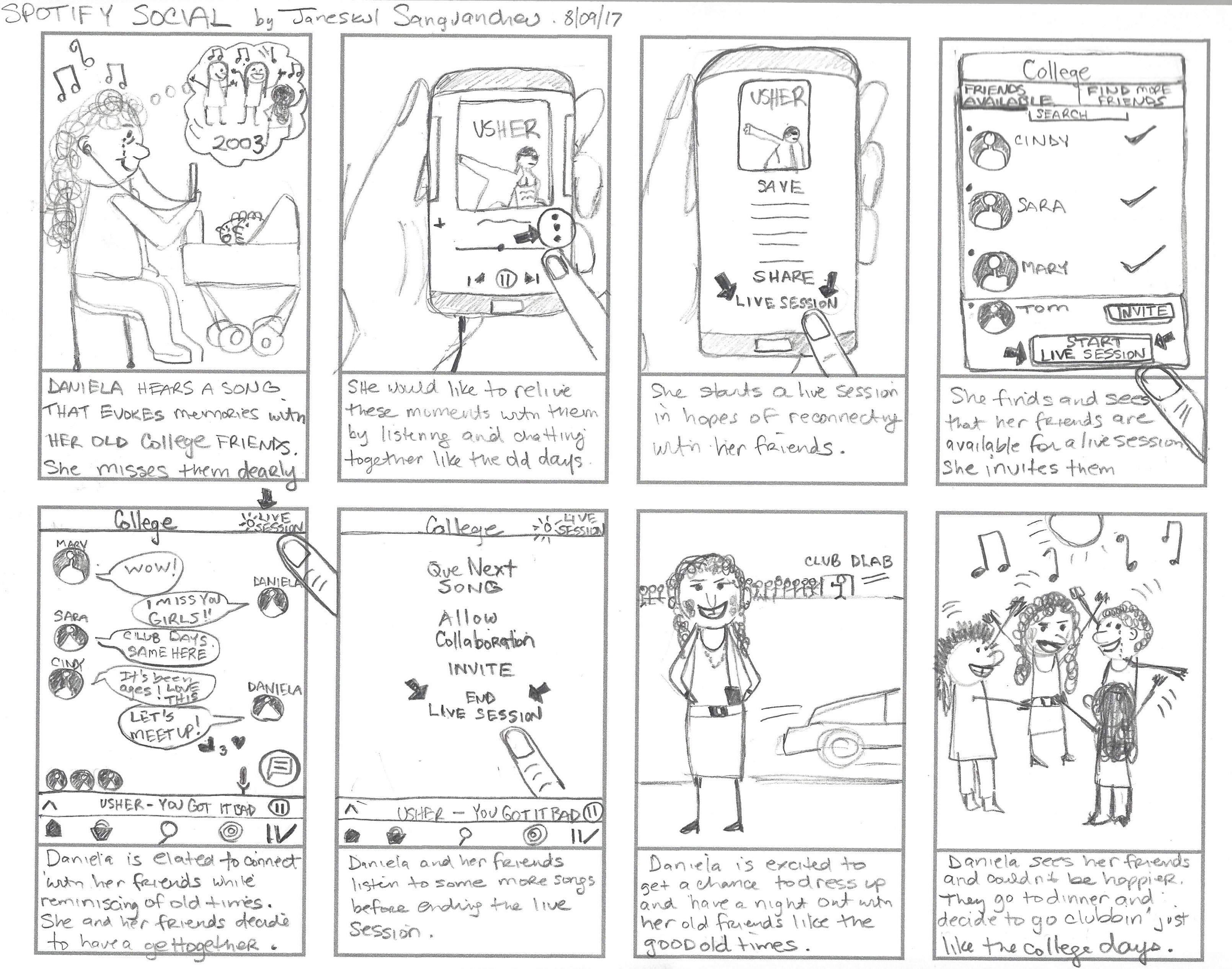 Storyboard sketches demonstrating how our persona, Daniela, would use the new social feature,
and the end result from using it.
By using the above storyboard as a guide, a User Flow Diagram was constructed and mapped out for ‘Daniela’ and her friend ‘invitee’.

The flow diagram demonstrates the typical path the target user and invitee could use to navigate to the ‘Live Session’, as well as options available while in the session. 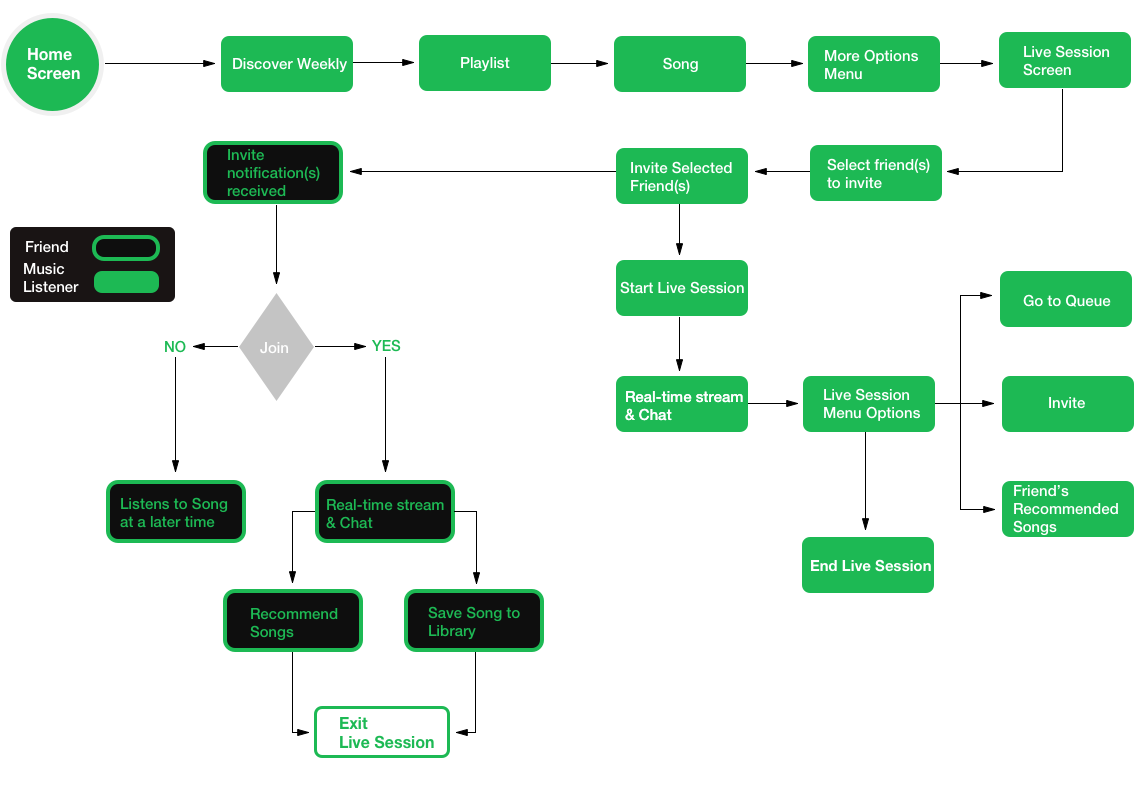 Building a new feature within the confines of Spotify’s existing app and its current design was a challenge, so great emphasis was placed on seamless integration of the new feature that would only enhance the user’s experience.

By referring to the storyboard and user flowchart, Sketched Wireframes were initially created followed by each screen of the flow being built into a mid-fidelity prototype in Sketch. 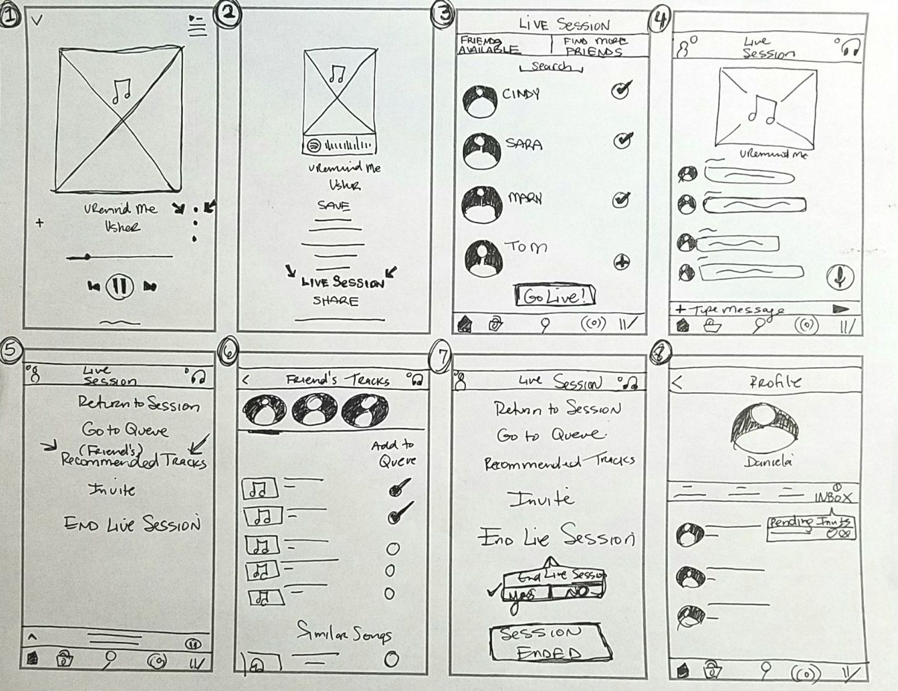 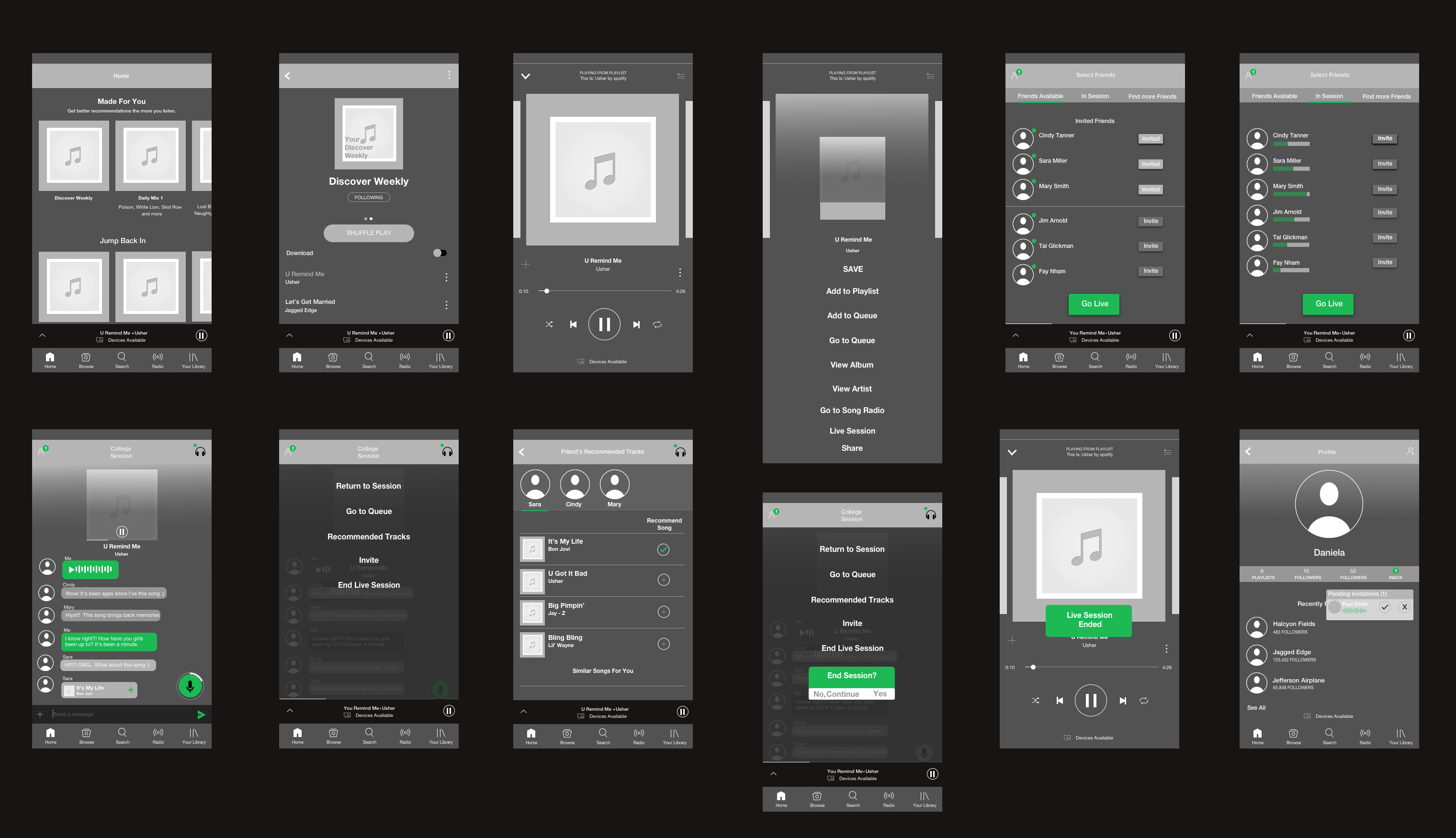 First rounds of usability testing were then conducted with  4 users representing the target group, using an interactive  low-fidelity prototype created with Invision.

“How do I get to the ‘Live Session’ screen?
There should be some type of instructions, especially as a new feature.”
Participants were initially asked about their experiences with using Spotify, then given an overall brief about the new feature and what the testing was about.  They were then given the specific task to start a ‘Live Session’, invite friends, chat, then Exit the session.

Feedback and from all participants were gathered and analyzed to  discover possible pain points and where improvements can me made.
“Is she already invited? The screen is a bit confusing.”
• All participants expressed confusion when inviting friends, as the ‘Invited Friends’ section showed friends that currently weren’t invite yet.

• 3 out of the 4 participants had difficulties locating the ‘Live Session’ link.

• Another concern participants had were concerning the ability to freely add music to the session.

• The initial design allowed friends to only ‘recommend’ songs, whilethe host would be the decision makerof what songs would be played, as like a DJ.

• Participants expressed that they would feel quite upset if their ‘recommended songs weren’t chosen to be played.

• An interesting insight suggested by a participant was having the option  to ‘Save’  all songs that were added during the session instead of just individually, and the option to  send your chat session to your email prior to leaving the session.
“What if the song I recommended doesn’t get chosen?
Does that mean I have bad taste in music?!
I’d be a bit upset about it.””

Based on the feedback received from the usability testing, the following improvements were made:
• An in-app onboarding guide was implemented for announcing the new feature to users, and to help guide them on how to use it

• Friends now have the ability to  freely add songs to the session by default, with the option for the host to have more control by adding a ‘DJ mode’.

• Users have the ability to ‘Save’ all songs that were added during the session, rather than having to save them individually.

• Chat Sessions can now be saved and sent to the user’s email address prior to leaving the session.
Experience the 'Live Session' feature in Action!
* Click Play *
Click Here to Interact 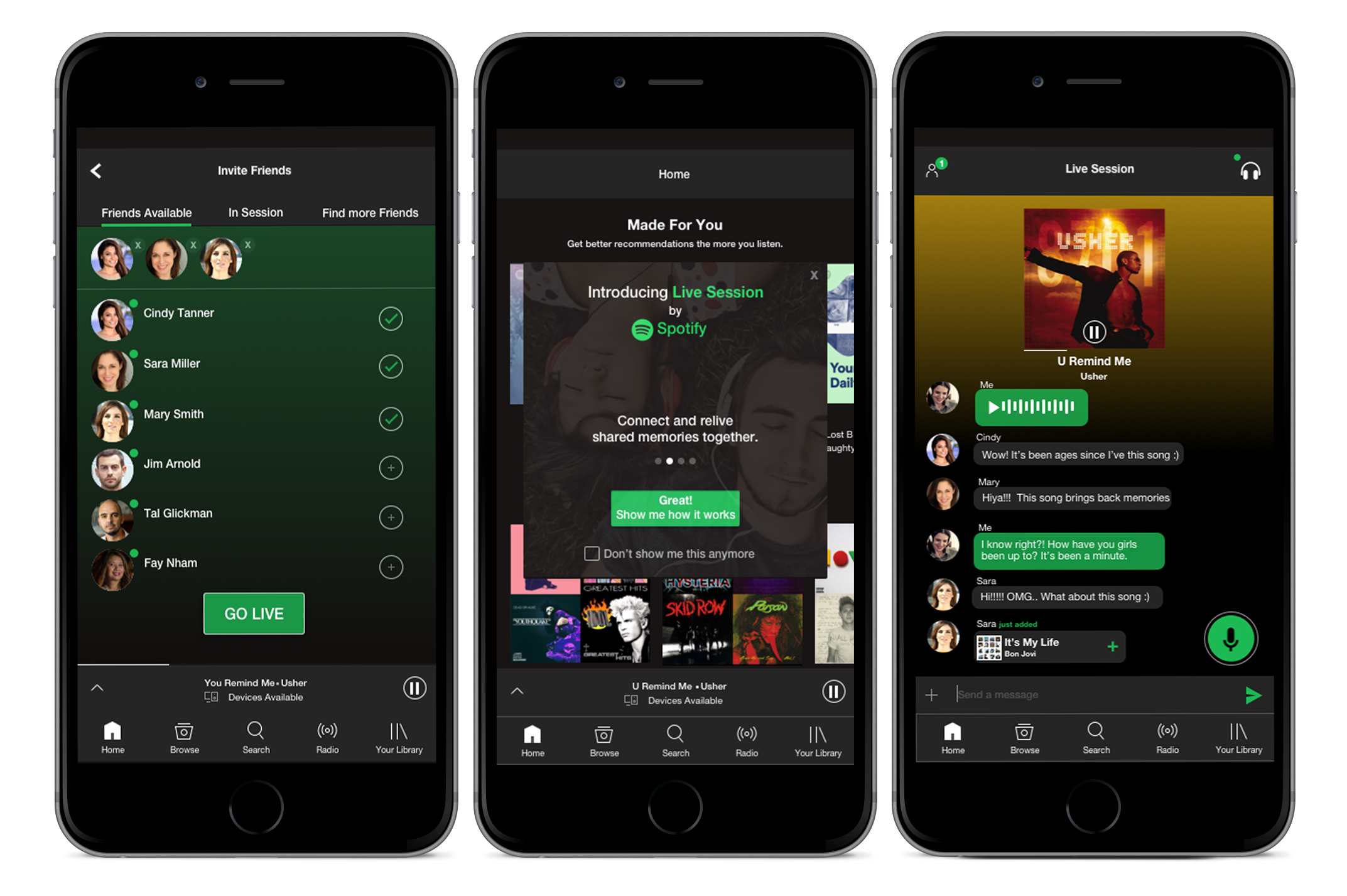 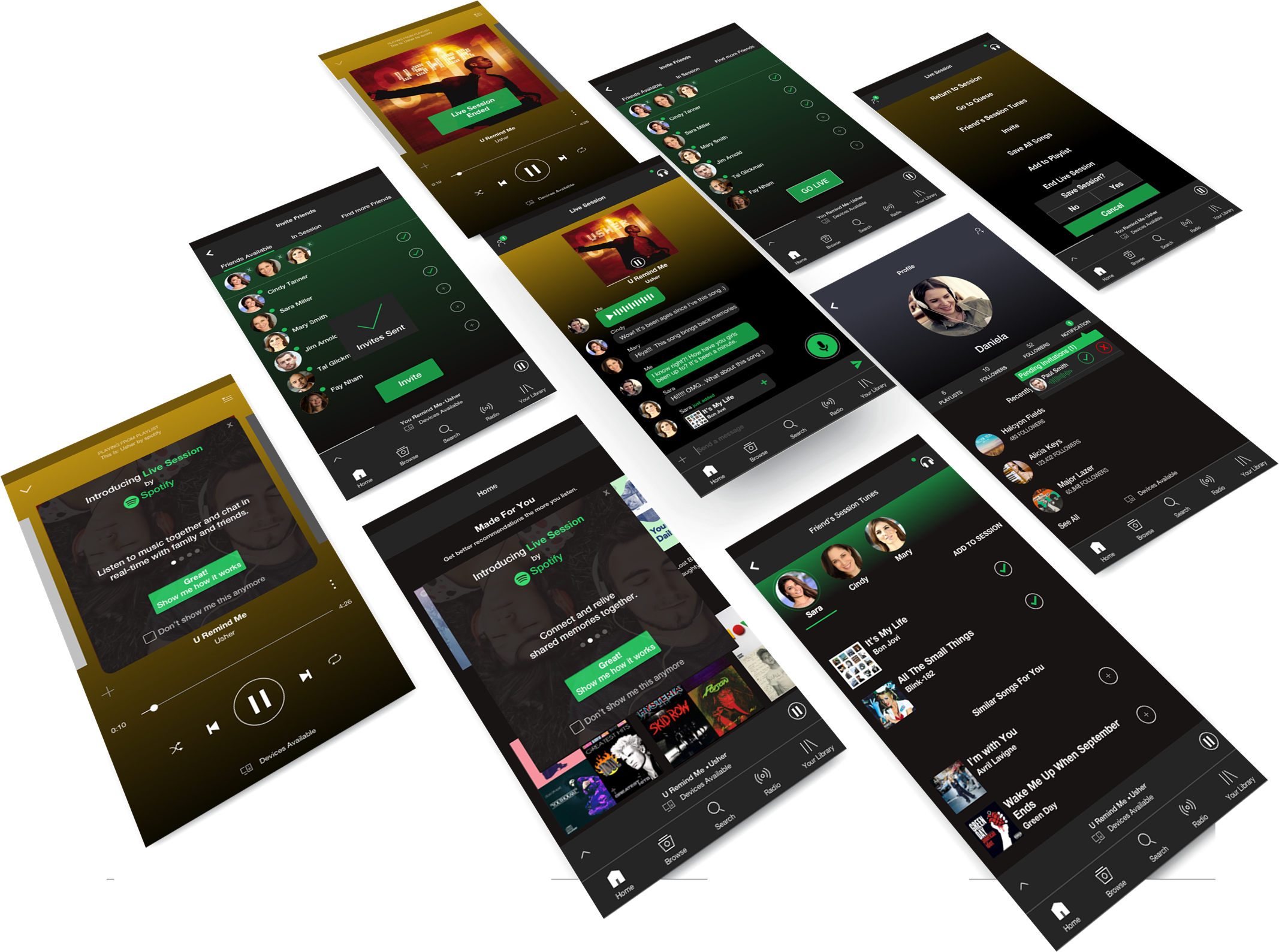 The Final Key Screens with iterations from user feedback

This project was a challenging, yet fulfilling experience attempting to solve this problem space for Spotify.  Since I was designing for an existing product, great emphasis  was placed on seamless integration of the new social feature, and within the confines of Spotify’s current design.

As I believe user experience designing does not have an end, and is an ongoing iteration process, given the time I would explore avenues for increasing user engagement of this new ‘Live Session’ feature through rewards and social validation.

Onboarding is an important element that I’ve included as part of my design, but would like to improve upon it for the next iteration, since increasing awareness of the new social feature is essential to its success. 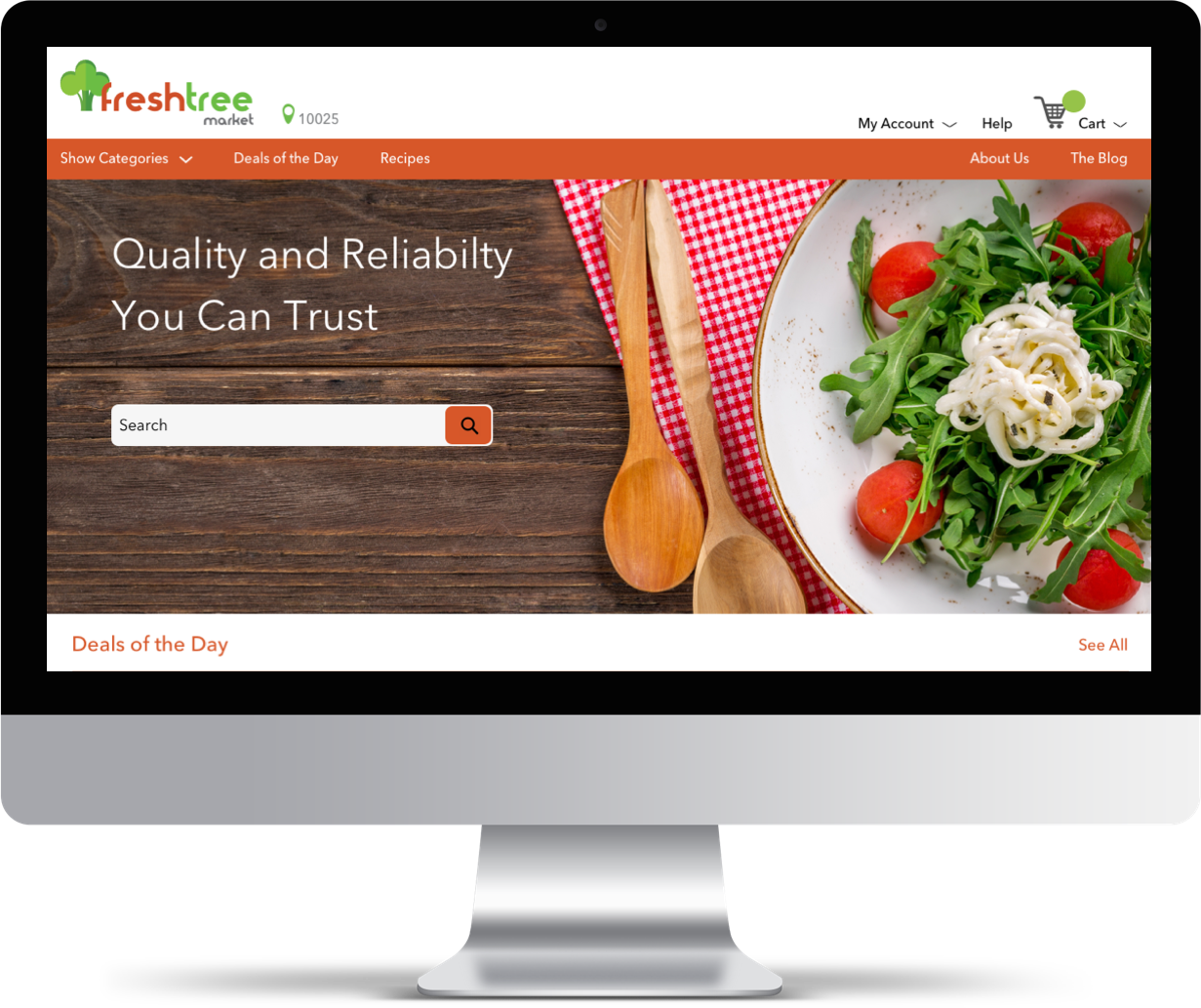